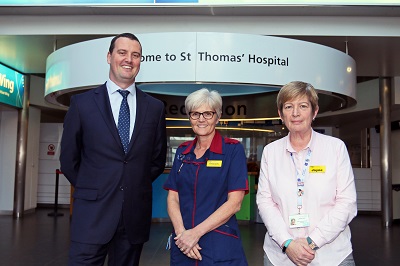 Guy’s and St Thomas’ have joined forces with the Metropolitan Police to encourage more staff to report violent and abusive behaviour by patients and visitors as part of Operation Cavell.

The move comes as the Trust revealed there had been 219 physical assaults on nurses and other frontline staff from April to September 2018.

It marks the next phase of the Keep our staff safe campaign which has seen Guy’s and St Thomas’ roll out body worn cameras for security staff earlier in 2018 after successfully trialling them throughout 2017.

The latest figures from Guy’s and St Thomas’ show the number of physical assaults has decreased from 274 in the same period in 2017 to 219. This has been attributed to the increased use of body worn security cameras and the support and guidance given to staff about de-escalating situations.

Jayne King, Head of Security at Guy’s and St Thomas’, said: “Being attacked should never just be part of the job for our staff. Whilst the number of incidents is still far too high I’m pleased to see the body cameras worn by the security team are acting as a deterrent and helping us to issue more sanctions to offenders.”

This website uses cookies to improve your experience while you navigate through the website. Out of these cookies, the cookies that are categorized as necessary are stored on your browser as they are essential for the working of basic functionalities of the website. We also use third-party cookies that help us analyze and understand how you use this website. These cookies will be stored in your browser only with your consent. You also have the option to opt-out of these cookies. But opting out of some of these cookies may have an effect on your browsing experience.
Necessary Always Enabled
Necessary cookies are absolutely essential for the website to function properly. This category only includes cookies that ensures basic functionalities and security features of the website. These cookies do not store any personal information.
Non-necessary
Any cookies that may not be particularly necessary for the website to function and is used specifically to collect user personal data via analytics, ads, other embedded contents are termed as non-necessary cookies. It is mandatory to procure user consent prior to running these cookies on your website.
SAVE & ACCEPT